November 11, 2018
In the last blog entry we introduced a new optimization algorithm - GCMA-ES  - and a new method to apply Lambert transfers for trajectory optimization - the Stochastic Lambert Solver. But we applied both methods only to variants of existing problems from the ESA GTOP optimization benchmark database GTOP Benchmarks .

As I showed Ingo Althöfer these results, he had the idea to apply the methods to something new. Ingo is Team-Manager of Team Jena which participated in all GTOC competitions since GTOC 5. This team has two special properties: it is both the smallest and the least successful team in the top ten. Probably these properties correlate. Beside its manager Team Jena has only one worker, the author of this blog.

GTOC 10 is near, so if my manager has a training task for me, I should start working on it. And it is getting cold in German November 2018, but not in my flat as long as my AMD TR 2990WX is running full thrust utilizing all 64 threads.


Around the World in Eighty Years

If you have a car, do you know how far you can drive using 550 kg fuel? May be about 6000-8000 km. That is not exactly the distance Ingo had in mind. In reminiscence to Around the World in Eighty Days (1872) from Jules Verne he thought about the following task:

Start with a small spaceship having a mass of 1500 kg from earth with a low start delta velocity of maximal 2.5 km/s, visit all nine planets of the solar system using only about 550 kg propellant in at most 80 years. Sounds crazy? It is, but this is not all: Unfortunately Ingo has seen Pluto Orbiter Mission . 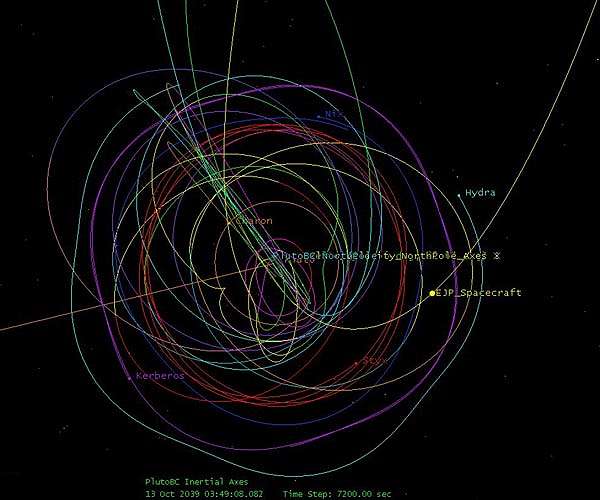 You can do all kinds of exciting stuff as soon as you arrive at Pluto. Only problem: Delta velocity relative to Pluto at arrival time should be quite low so that you can start gravity assist maneuvers around Pluto's moon Charon. 80 years sounds like a long time, but look at Solar System to realize how far we have to travel. Ingo also thought about using solar sails but fortunately he has other friends he will ask about this. I have no clue how to slow down for the Pluto orbit insertion if the “wind” blows almost directly from behind. Maybe you have?
Remark: In the discussion whether Pluto is a planet we agree with Pluto Planet Definition .

Finally we found a trajectory which can be viewed at Jules Verne Tour .


Start from Earth, head for Venus and Mercury 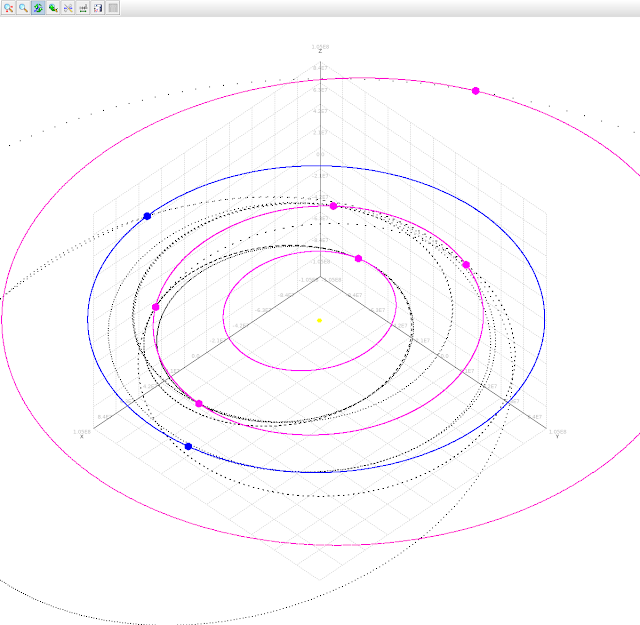 Jupiter, then Mars and Saturn 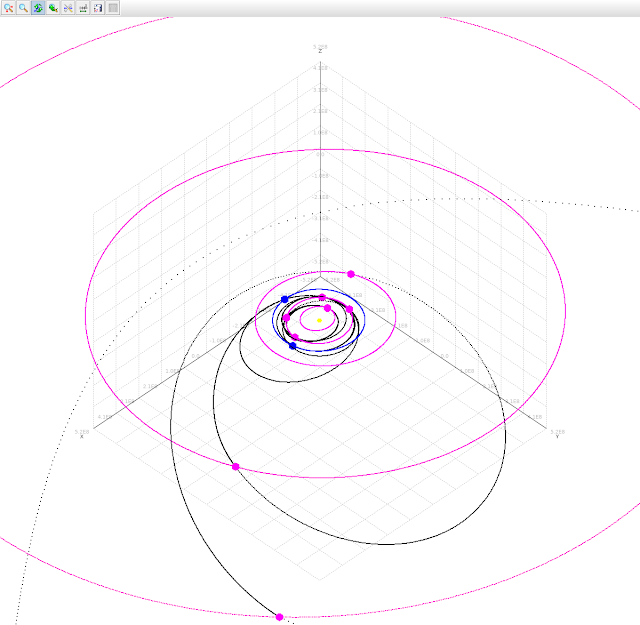 Neptune, then Uranus and heading for Pluto 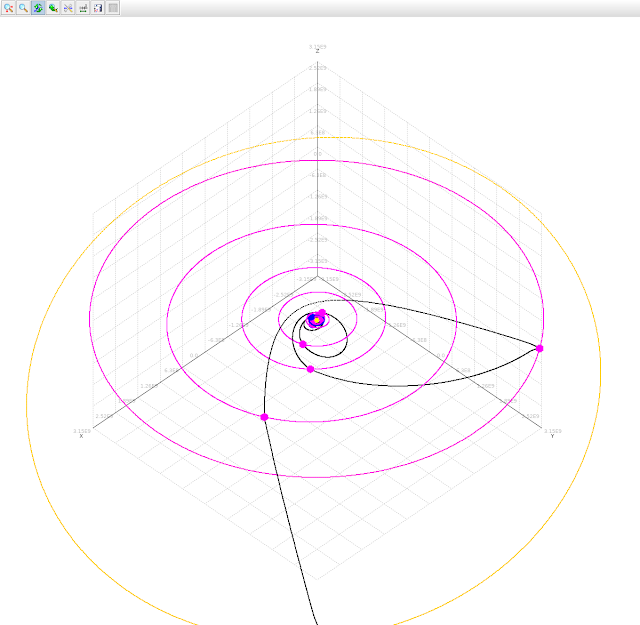 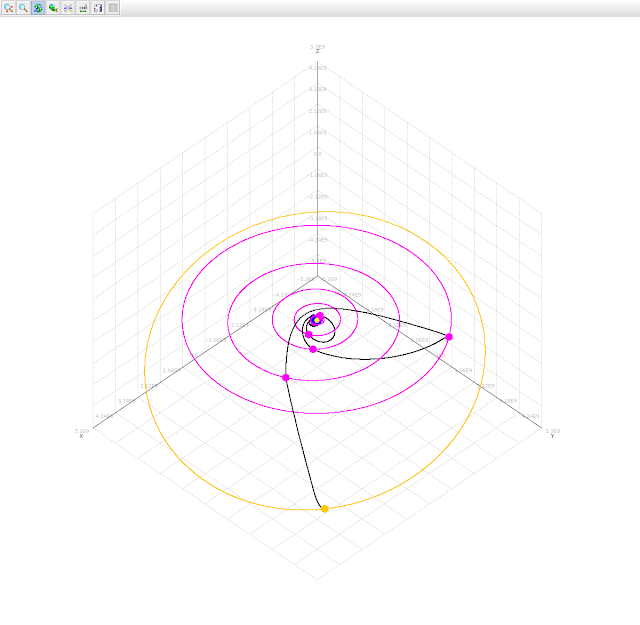 How to start? There are two main options:
We already extended this code by a Stochastic Lambert Solver but we need some more changes:

To our surprise we found out, that this optimization task is significantly easier than both messenger full and the modified GTOP GTOC1 task. No impact as second objective as for GTOC1, and no DSM-1 maneuvers which complicate messenger full.

As usual (see How to utilize the TR 2990WX) we configure the AMD TR-2990WX to run 8 GCMA-ES optimization tasks in parallel each using 8 parallel threads. This way about 40x10^9 Lambert transfers are computed each hour. After 1-2 hours we collect the GCMA-ES results and use this as basis for evaluation of the planet sequences tested. We use the linux numactl command to minimize the negative impact imposed by the two NUMA nodes without direct memory access. Without numactl all cores will still show 100% usage, but both performance and power consumption will be reduced. More importantly also the room temperature will drop, something you want to avoid during a cold November.

Remark: Overclocking the TR2990WX is a very good method to further increase the room temperature since it reduces the power efficiency. In November an all cores overclock to 3.85 Ghz proved sufficient, something to be reconsidered during winter or if you plan to heat up a larger room.

We tried sequentially the the following planet sequences (m=Mercury, M=Mars):
in overall less than 12 h CPU time until we were satisfied with the result:

As limits for the global optimization we used:
Multiple Venus encounters are required to first slow down for Mercury and then accelerate for the outer planets. At Jupiter we have to keep distance because of its radiation. Nearly all of the needed delta velocity is provided using gravity assists.

For the resulting Lambert arcs we list the dates of the encounters and the delta velocity values between these arcs.
Planet encounters:

We calculate a year as 365.25 days. Since 2100 there is no leap year, we arrive one day later as expected. Likely some better tours are possible. Who finds some?

If we take the efficient low thrust engine from the GTOC 8 task - Isp = 5000 and maximal thrust = 0.1 N - these are very reasonable delta velocity values. We performed the conversion into a low thrust trajectory on a leg by leg basis. A global continuous thrust optimization would not result in a significant improvement, since the very high time of flight values simplifies the conversion.

Our processor is utilized as usual performing 8 low thrust trajectory conversions in parallel each using 8 threads allocated to a parallelized CMA-ES implementation. Then we chose the one with lowest fuel consumption. The whole process takes less than 30 minutes.

Note: Conversion of multiple legs of the same trajectory cannot be performed in parallel since we don't know the start mass of each leg in advance.

But what happens if you try to save engine mass by equipping the 3000 kg ship with a weak 0.1 N engine? May be a bad idea, since now the slow down at Pluto is significantly harder and the trajectory needs 796 kg more propellant.

Additionally you need a more expensive rocket at start since now a start delta velocity of 2.8 km/s is required.

Popular posts from this blog

How to use the AMD Threadripper 2990 WX for Scientific Computations 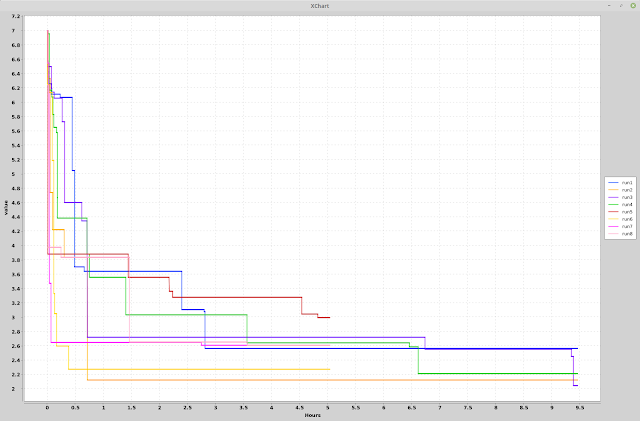 The AMD Threadripper 2990 WX is a processor suitable for scientific computations but since only two of its four NUMA nodes have direct memory access it is difficult to exploit its power completely.

Ant Colony Optimization or CMA-ES, what is the Best Approach for Space Mission Design? 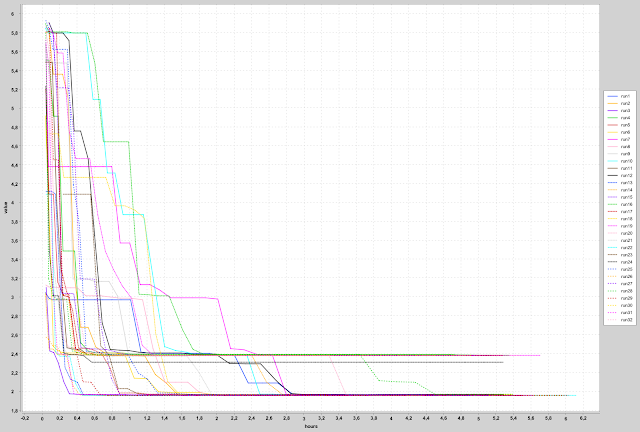